new post: One Year On: How We Do It, in which I acknowledge that it’s been a year since our tragic loss, and try to give a more full answer to “how are you, really?” than I can in casual conversation

One Year On: How We Do It

Saturday, July 30, will mark the one-year anniversary of the car crash that took our daughter Mary from the world. We aren’t planning on “doing” anything to mark the date, because that date isn’t something we want to focus on. Not this year, at least. Mary’s birthday on April 4, or other holidays that we were lucky enough to share with her 20-plus times, or just any ordinary day when we miss her (every ordinary day): those are what we want to focus on. Her life, not her death.

So we’re not commemorating it, but it still exists. It’s a milestone on this road: one calendar year. All the things that happen on calendar dates, like that birthday and those holidays, have now come and gone once each. Some of them weren’t so bad, some of them we had to white-knuckle it, most of them were less rough than we’d braced ourselves for. Next up: the second of all those dates, I guess.

What’s great about the one-year mark is that that’s when we get our Certificate of Being Done from the Office of Bereavement & Loss, and we won’t have to grieve or be sad anymore. What a relief! When people ask us how we are from now on, we can just say “Fine! You?” (with varying levels of sincerity but basically actually meaning it), just like we could before July 30, 2021.

That’s obviously not true, of course. And I was going to add something like, “though I’d give my right arm and every penny in the bank if it were,” but that’s not really true, either. What we’ve learned – what a lot of people already know, but we didn’t, not like we do now – is that grief is the obverse of love. It’s not easy, but it’s that simple: it’s just the other side of the coin. The loss hurts in direct proportion to how much you loved the one who’s gone. A more “natural” timeline or other circumstances may ease that: losing someone in their 90s whose death frees them from chronic pain after a long illness might hurt less than losing a young woman whose adult life had barely begun. (Or it might be every bit as bad; there’s no accounting for this stuff.) But to forego the grief and heartbreak would require cancelling out the love that came before, which is as unthinkable as it is impossible.

So what does a year mean? Not the end of this “grief journey” (as they call it), any more than two years, or ten, or fifty will mean the end. But the pain is less terrible, on a daily basis, than it was those first days, weeks, and months. A friend in our grief support group has put it as well as I’ve heard anyone: it doesn’t get easier, but it gets softer. Now, we can go about our lives as if they were normal, in bursts of varying length. The length of a movie, or a meal, or a soccer game. An afternoon, a work meeting, an exercise class.

And in between those bursts, we remember. And while remembering the loss hurts, the memories and thoughts of Mary aren’t a bad thing. Not at all. They’re often sweet, if sometimes with a healthy dose of bitter; sometimes they’re just plain sad. But they are always – always – welcome. Trying to not think (or feel) about her isn’t what we want, or need.

The same goes – one hundred percent of the time every single day – for anyone who wants to share memories or thoughts about her with us. You cannot make us sad, or mess up our day, or bring us down in any way, at all, by talking to us about our Mary, or missing her. I promise. Another support-group friend had someone ask if they should share with her some old pictures of her daughter that they’d come across. They were afraid the pictures, and the memories, would be too painful. Yes, share them, of course, she told them. I never get any ‘new’ pictures of her, otherwise.

That support group, by the way, is run by The Christi Center, and it has been a true lifesaver. (It’s an Austin/Central Texas organization; we don’t have experience with The Compassionate Friends, but I understand it’s similar, and has chapters across the country.) Hearing other peoples’ child-loss experiences, across a huge variety of circumstances, ages, timelines, etc., has strengthened us and helped give us perspective. We’ve read a (still-growing) stack of grief literature, which has also been helpful, but direct communication, even by Zoom, with people who are on this same damned road has been essential.

People wonder sometimes “how we do it.” How we got through a whole year, or how we got through yesterday, or how we’re going to get through tomorrow. How we can be so “strong”. The blunt truth is that, leaving aside self-destructive options that would only cause more pain, there just isn’t a choice. I said before that it gets “softer”, but that’s a generality, and a polite one. Most of the time, on most days, we’re about as okay as anyone, but sometimes we’re hit with the full force of this absolutely horrific reality – what your mind might give you a glimpse of if you try to imagine being in our shoes – and it really hurts. Of course it does. But it doesn’t last. It can’t. And then we go on, because that’s all there is to do.

The best analogy I’ve heard is that this level of loss is like an amputation. An amputation of part of your heart, in a figurative, non-cardiac sense, obviously. (One thing that’s weird about this figurative amputation is that it’s not externally visible. If I lost a leg, people would see it, and accommodate or acknowledge my disability, or at the very least know that something serious happened to me. Not so with this loss. Do the new hires on my team at work know? Only if someone told them. Do I want someone to tell them? I’m not even sure. It’s weird, is all I’m saying.)

I think the amputation analogy applies pretty well to the “how do you do it” question, too. If you lost a leg: how would you get by after that? Well, your life would be drastically altered, and it would really suck sometimes, and it would really, literally hurt sometimes. But you’d still be here, and there would still be a life to live. One way or another, you’d get through this day, and you’d go to bed. Maybe you would have an okay night, or maybe you would lie awake and feel sad for what you’d lost. You’d wish you could hug your leg one more time, or laugh with it, or make it its favorite dinner, or help it plan its wedding someday. But either way, the alarm would go off the next morning, and you’d get up, and you’d do it again.

Lastly, we sure haven’t been doing it alone. In addition to the weekly support group, the love, thoughts, and kind words we continue to get from family, friends (of ours, and of Mary’s), and everyone mean a lot to us, and help us so much. Thank you.

finished reading The Grieving Brain by Mary-Frances O’Connor 📚 it was interesting to read a book backed by science that supports & explains much of what we’ve learned elsewhere about grief. thinking of grieving as a special kind of learning is a key point

a favorite holiday album for years, this is about all I can stand to listen to this year: Over the Rhine’s The Darkest Night of the Year. happy solstice, &c.

finished Joanne Cacciatore’s Bearing the Unbearable, a beautiful book. ideas about “stretching & strengthening the grief-bearing muscles”, plus kindness projects, stood out. if nothing else, the title encapsulates the experience about as perfectly as anything I’ve heard 📚

I’ve rarely ever written much of a very personal nature here, and I’m still not sure I want to now. But I’ve experienced a loss so profound that I feel I have to at least note the fact of it, whether or not I end up writing more about it than this. I want to get back to posting whether I liked this book, or that beer, or how my writing is going, but how can I, after this?

Anyway, it’s this: in the early-morning hours of Friday, July 30, our 23-year-old daughter Mary was killed in a car crash here in Austin. She was a passenger, and the car she was in was hit by a reckless driver. Dumbfoundingly, the other three occupants of her car were fine, but she never regained consciousness. The at-fault driver also died, after more than a week on life support.

A week after the accident we held a memorial service for her, in the morning. That afternoon we got the news that my (unvaccinated) brother-in-law had lost his weeks-long battle with Covid-19. A week later we were attending his funeral.

That was four weeks ago yesterday, and I don’t think I could put this unimaginable hell into words even if I wanted to. There are at least occasional periods of time now that are bearable, and even, every now and then, a faint glimmer of being able to give the tiniest fuck about life or the future. That’s progress, I suppose.

One thing I did (god knows how; I barely remember it) was make a simple system by which those of us who miss her can send texts to a special phone number (Twilio, natch) that then get published to a website (Micro.blog) and cross-posted to a social media network (Twitter, yuck, but that’s where her friends are). The messages are here, with a detailed explanation here; Micro.bloggers can follow her through @maryg and Twitter folk can find the crossposts on @WeMissUMary. I hope/plan to publish the Node.js source at some point; there is a lot of room for improvement.

Other things are going on, too. It’s bizarre and frankly more than a little rude how life continues on, good and bad, despite this level of debilitating tragedy. But maybe now I can post a mention of those things here and not feel like I’m pretending this didn’t happen.

For a start: I liked this book, and that beer, and my writing was a finalist in a contest. Big damn deal. 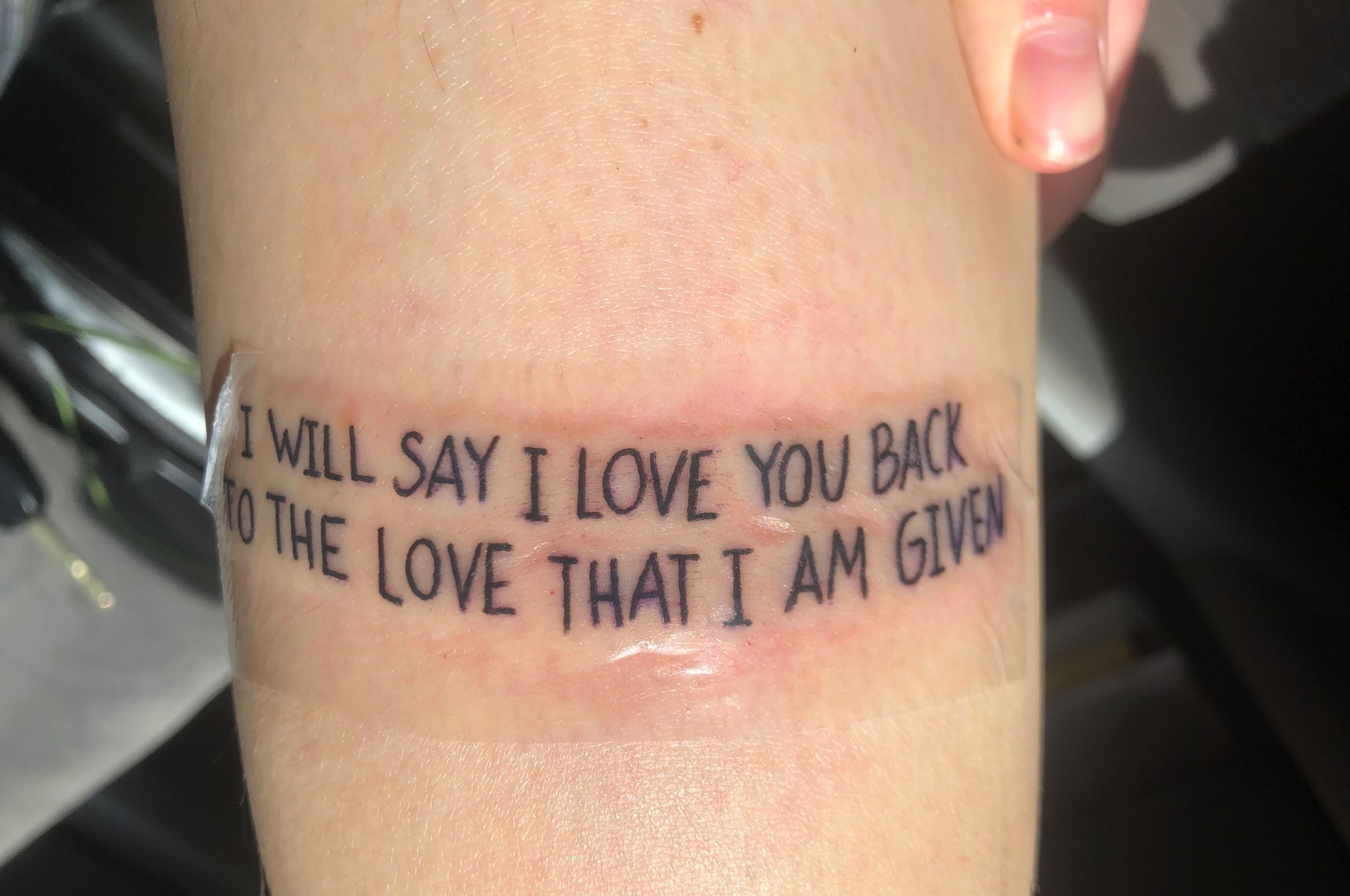 how the fuck am I supposed to be able handle that?